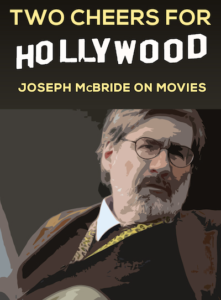 Two Cheers for Hollywood: Joseph McBride on Movies  is the 19th book from the noted film historian and draws from some of his finest work of the past 50 years.

McBride has written three books on Orson Welles and appears in the upcoming  The Other Side of the Wind.  It’s not surprising that  Two Cheers for Hollywood  has two selections dealing with Welles: “Too Much Johnson: Recovering Orson Welles’s Dream of Early Cinema” (updated from its original April 2014 publication in Bright Lights)  and a discussion of the controversy over the script of Citizen Kane  as part of his essay  “The Screenplay as Genre” (from the Harvard University Press book  A New Literary History of America, 2009).

The 64 selections found in Two Cheers for Hollywood  span the period from 1967 to the present, with new essays on blacklisted screenwriter, novelist, and historian John Sanford; directors John Ford and John Huston; and an 18,000-word monograph on the Coen Bros.

“There are several new pieces –- I did not want it to be just older works, and I had more to get off my chest,”  McBride said.

In addition, there are new introductions to the previously published writings, with additional information and often humorous background on them and their subjects.

The son of journalists in Milwaukee, McBride began writing at an early age.

“My first published article was in May 1960 for the national Catholic school magazine Young Catholic Messenger, a profile of Greg Spahn and his father, the great lefthanded pitcher Warren Spahn of the Braves,” McBride recalled. “Greg was on my Little League baseball team, the Wauwatosa Lightfeet. I earned $40 for the article — and after that I knew I could sell stuff, even though I spent seven years not succeeding until I discovered film in a serious way at the University of Wisconsin, Madison. And by then I was writing my first book, on baseball slang.” 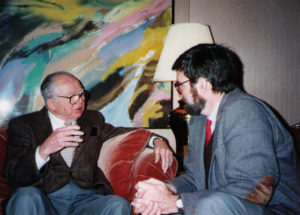 Looking back at his work, McBride said he has become more overtly personal in his writing. “Partly due to insecurity about being young, I had this attitude of trying to seem a bit too august and authoritative in my early writing. Over the years, I’ve become more at ease and adventurous and bolder about speaking out in my own direct voice.”

Asked to choose a favorite among his books, McBride said that while Searching for John Ford, his biography of his favorite director, is perhaps his most popular, he considers Frank Capra: The Catastrophe of Success to be his best work. He spent more than seven years researching and writing that iconoclastic biography.

He is currently in negotiations for the publication of his 20th book, How Did Lubitsch Do It?: The Films of Ernst Lubitsch.

Like many of McBride’s previous scholarly efforts, the critical study of the German American director will be rich in detail.

“My books have gotten longer,” McBride said. “I have more to say.”

* *  *
Two Cheers for Hollywood: Joseph McBride on Movies is available exclusively through Amazon. McBride is a professor in the School of Cinema at San Francisco State University, where he has been teaching film history and screenwriting since 2002.